Back in February a series of painted black rats appeared running around the bottom of our local Sainsburys http://gnatbottomedtowers.blogspot.co.uk/2017/02/ratty.html Whilst nipping round the town centre quickly earlier in the week I clocked this....with only my phone to hand I snapped it in passing and promptly gave it no further thought. 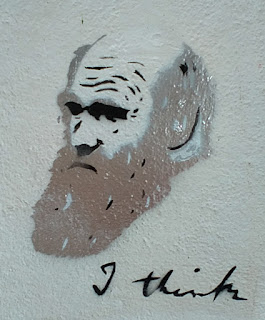 Once a month I read a selection of articles from our paper- it's recorded and distributed to various visually impaired listeners who live within the district. Lo and behold this had made it in [must be a quiet week news wise!] with the speculation of whether it could be a Banksy. Me? I'm more cynical and would suggest more "In the style of Banksy". I shall eat my hat if I'm proved wrong...whatever, I do like a spot of clever graffiti.