Something about this time of year makes me want to start rummaging and sorting out here at Gnat Bottom Towers. It's always the same, but it means I rediscover things or look at the familiar anew. This time I've turned up my list of places to visit which hasn't come to my attention in months and a quick scan revealed that we would be passing one en route to a clan gathering over in Hampshire.

Without any expectation [it being New Year's Day and all that] we pulled up and I tried the door at St George's church in Trotton, West Sussex. I've brightened the colours, but it was much duller and rainier than it's showing...no worries though because I'm pleased to say the church was open for me to kickstart my neverending quest for the unusual in 2018! 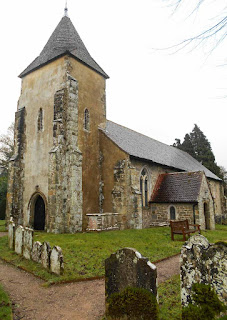 It's known for its marvellously preserved 14th century wall paintings which are around the whole interior and depict both religious and secular matter. The best ones though are the Last Judgement. 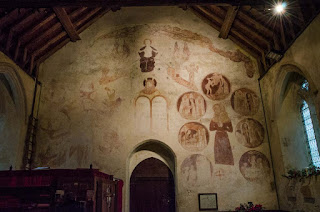 I've seen a few of this in my time, but here we have in the centre Christ sitting on a rainbow with Moses beneath him. I don't recall ever seeing quite such a realistic facial/hair depiction before. 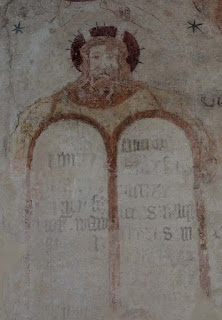 Off to the left hand side is a badly faded carnal man with all the seven deadly sins and on the right the good man and the seven acts of mercy. The two examples I've shown images for are tending the sick and giving drink to the traveller. 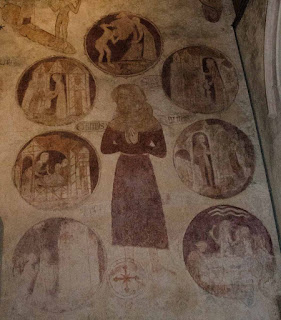 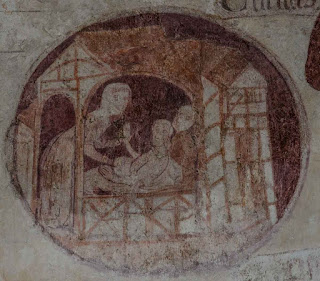 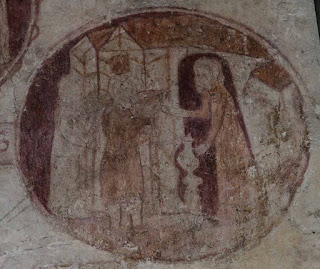 Much of the church's history is tied up with the local Camoys family. Thomas commanded the left flank of the English Army at the battle of Agincourt in 1415 and his military splendour is reflected in the full suit of armour he's seen wearing in the huge brass dedicated to him. Next to him is his second wife Elizabeth Mortimer. She had previously been the widow of Henry Percy, made famous by his more common moniker of "Hotspur" in Shakespeare's Henry IV Part 1. 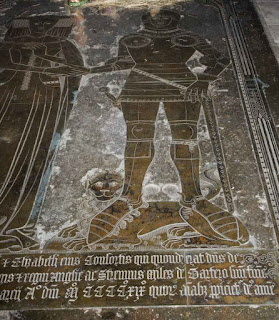 Since returning home I've learnt that the oldest brass depicting a woman also resides here. To be honest I'm not sure whether I missed it or if it was hiding under the mat to prevent damage. If you're interested then it might be worth keeping your eyes peeled should you ever decide to visit!