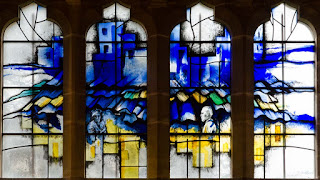 "Makhalipile" was the nickname given to the anti apartheid campaigner and erstwhile president of the movement, Bishop Trevor Huddleston, by his supporters and it means "dauntless one". A former pupil of Lancing College, this is the memorial window to him in the school chapel. In 1941 he went out to South Africa and made it his life's work to bring a policy which segregated people along the lines of their skin colour to an end.

The window was designed by the Chichester artist Mel Howse and is the division between the rich and poor. The corrugated iron roof splits the two classes with the city above and the shanty town below and it is very striking. Huddleston is depicted in one of the panels.

If you double click the image to enlarge it you will be able to see the face behind the mother and her infant.

Huddleston's lifelong friend, Archbishop Desmond Tutu, dedicated it to him in 2007.