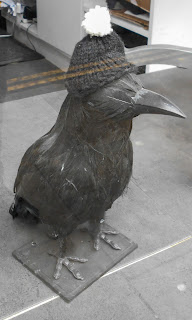 The first time I learnt the collective noun for crows...a murder of crows I was hooked on this often strange way of naming groups of animals and birds. Most will know a gaggle of geese, yet it's a skein when they're flying. These differing nouns occur with other breeds depending on their activity at a given time. Sometimes a breed will have more than one collective noun or one noun will cover more than one type- a parliament of owls or rooks anyone? From the lists I've got in a couple of my books they don't get any less peculiar the more you look into it either. Rather than repeat verbatim another's research this article offers up some theories as to where the descriptions derive from http://www.countrylife.co.uk/nature/collective-nouns-for-birds-68344 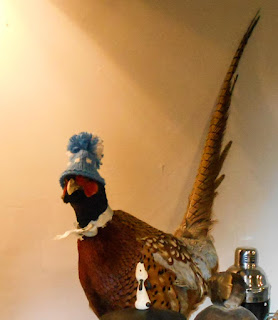 These are just a few of my personal favourites.....a bouquet of pheasants, a piteousness of doves, a scold of jays, a convocation of eagles, a deceit of lapwings, an unkindness of ravens, a richness of martens or if you prefer the animal ones, a business of ferrets or a kindle of kittens. There are many more I could have chosen from! All quite intriguing if slightly barmy and unfathomable! And no don't ask me what the birds in hats is all about...I was just overthrilled to have found a corvid in a hat last week to match my pheasant in knitwear from last year!