The Angel of the South

Grand plans for watching the wife carrying race over at Dorking were swiftly cancelled when the rain persisted [hopefully next year the weather will play ball] and a new scheme was hatched.

En route to our final destination we stopped off in the small West Sussex village of South Harting. There's not a great deal there, but we did as per usual take a quick shuftie at the church of SS Mary and Gabriel. As it's never been on the radar really I didn't know what to expect, but as ever I have been surprised. 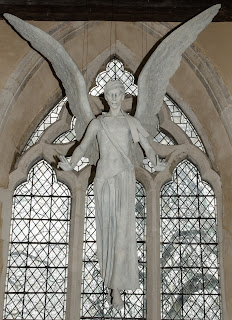 This is the Archangel Gabriel who is seen as an uplifting symbol of  hope. The near invisible suspension wires make him look as if he really is descending in flight. The figure is life size and was created by the sculptor Philip Jackson. Commissioned by a private benefactor it is in memory of Charlie. Whilst not a religious person, I was able to admire the piece as a work of art showing me once again the beauty of when humans are creative rather than destructive as is oft our wont.