A little secret now.....Aril is extremely partial to crumble either as a pud or cakes with a crumble topping. Recently she's been spotted in a couple of local cafes stuffing her face with a mincemeat crumble slice and a jam version...she should perhaps explain that she was out "for coffee" and catching up with friends at the time.

My new Make, Bake and Create challenge got me thinking about, if I'm so keen on crumble slices, why I've never had a go at making them myself.  I try to limit baking these days to special occasions only and what could be more important than a belated birthday cake for my friend H. Normally I make her a cake over Christmas as her birthday is in late December and rather gets lost in the swirl of festive glitter and celebrations. Unfortunately for the first time this year I had to postpone as I had too much work on, but I did promise to make amends when we next met.

Using this recipe https://tasty.co/recipe/shortbread-jam-squares I made these [the tin size is nonsense. You need a smaller one as there simply isn't enough dough and we had to do a bit of tweaking with cooking times etc. We definitely didn't need the entire jar of our homemade raspberry jam for it either, but they tasted moreish so will do again but with amendments. 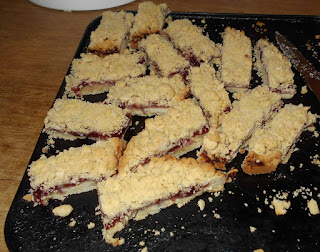 Now if you're going to eat crumble slices for pud you might as well be wicked and accompany it with a scoop of the raspberry and vanilla icecream we'd also made which has used up the remainder of our frozen berries and the lurking half tin of condensed milk. Result! 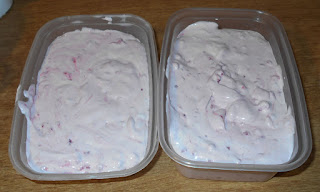