Now I'm at the glorious age where I could tell you the collar size of the chap's shirt across the road if he stood with his label poking out in his kitchen, but am utterly incapable of reading ingredients on food packets, making out menus or threading a needle without my glasses. I don't need specs for driving, day to day stuff or watching the TV which leaves me often having to hunt around for them when I do need them.

Over time the novelty of playing hunt the glasses case has worn off rather. Upon reflection I don't think the matter is helped by the dratted thing being such a pale grey as it shows up even less. Last week I finally lost the will to live with it and took matters into my own hands......one permanent black marker and a fist full of felt tips later I feel the revamped version should not now find it so easy to evade capture. 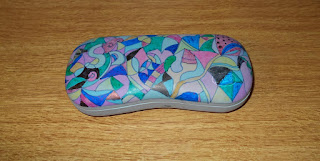 I could have bought a new one, but if I'm making a concerted effort to stuff the stuff and buy even less mass produced this year then I have to think up new solutions with what I already have. Thankfully this will be a one off and not appearing in an Etsy shop near you anytime soon!