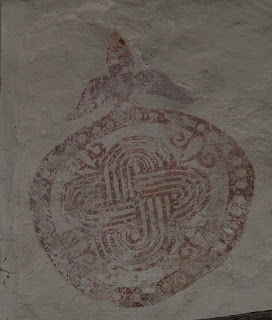 This well preserved painted Solomon's Knot is high up in one corner of St Mary's church in West Chiltington, Sussex.  It was intended to stand out as it's about a foot in height and width yet nobody is quite sure why it's there. The Suffolk Medieval Graffiti site records similar etchings which possibly were meant to reference King Solomon of the Old Testament. An archangel gave him a ring with a symbol on it that allowed him to control demons. If you could attract them in the first place the possible belief was that they would be compelled to follow the line of the knot....however, this is a line with no end and they would become trapped. Perhaps it had a religious significance which we no longer can access or maybe it was there as a protection against malign forces. We can only speculate.

What is undisputed is that this symbol turns up in other religions and in the ancient empires of Rome and Greece. It's origins may be murky, but its potency has straddled the centuries.