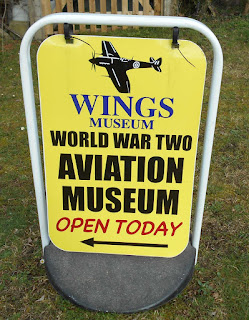 With the wind blowing an absolute hoolie on Sunday all plans to walk up in the South Downs were cast aside in favour of an indoor activity. I'd only found out about this local museum the day before but it seemed a good contender in the alternative options stakes!

Housed inside an enormous industrial warehouse, this is one of those marvellous and rather less slick museums you get when a load of enthusiastic, knowledgeable volunteers come together and pool their resources. It's crammed full of exhibits which show the impact and cost of the war. It doesn't shy away from the reality....the crashed planes are shown as they were found....tangled fuselage with any casualties listed with them. Some of the casualties have never been found, but it also touches upon events at a local level. It was sobering to learn of the bombing of a local school when the lone bomber had missed his original military target.....28 children, two teachers and a local lady perished. Yet interwoven with all this horror are details which give an insight into how the war impacted the lives of civilians and everyday human stories. 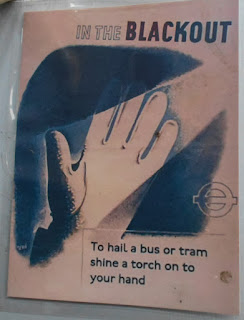 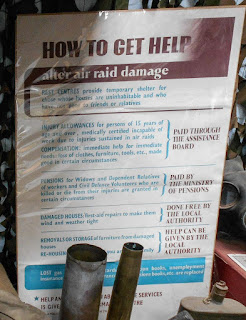 This German horror was called a butterfly bomb. Many children were attracted by its shape and picked them up thinking they were shrapnel. Tragically they were fitted with time delay and anti disturbance fuses so many young lives were lost to them. 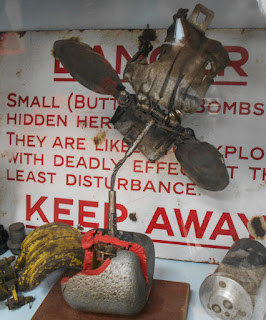 This is one of several recreated crash site diaramas. It puts a very different spin on the other WW2 RAF places I've been to where the planes have been restored to their pristine original selves. It forces you to stop and think. 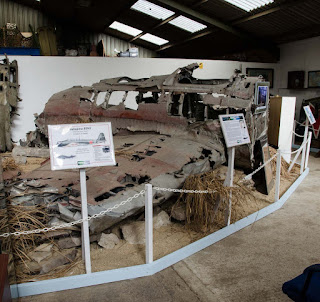 An original Air Ministry scramble bell which was rung for precisely that reason...to alert the pilots to scramble and gave rise to the saying "Don't come round and tell. Ring the bell like hell!" The photo below shows a silk escape map which would have been carried by a Lancaster pilot on operations in Germany. 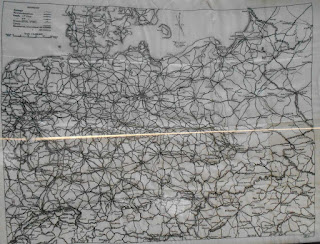 To finish this small overview the wedding dress of Lily Parish who married her fiance, Arthur just after the end of the war. It's made from a German parachute which Arthur retrieved from a store in Germany when he was out there on active service with the RAF.  Fabric continued to be in short supply for many years after hostilities had ceased.

Now I'm not one that is remotely interested in the mechanics of planes or the historical details of the battles, but even for me it was a place that I would happily return to.