Guilty as charged....we had done that very British thing of parking up on the side of the road on Sunday in order to eat our sarnies and drink coffee from our flask. It was too bleeding chilly to go searching for anywhere prettier, but I have to say the view from the car wasn't exactly without its merits. 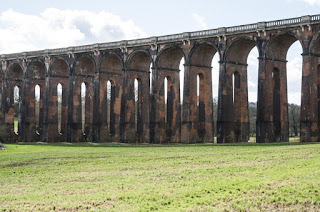 This is the Balcombe viaduct which was built in 1839 and still has 110 trains cross it a day. It's a feat of confident Victorian engineering where they built things to last in the absolute certainty that the Empire would continue forever.

I couldn't help but remark to Mr GBT that this determination and rather arrogant approach put me in mind of the Romans who seemed to hold similar views. They too built with determination and longevity in mind. Years ago I saw a Roman aqueduct in Israel. It might have been 2000 years old , but it was still in pristine condition and looked like it could have been put up the day before. They had a not dissimilar attitude to matters of Empire I seem to recall and we know what happened in the end don't we! The Balcombe viaduct is now Grade II listed.