Jack and Jill were already up the hill.

Please meet Jack....he's unusual because windmills invariably are given female names. He's a tower mill and there was I thinking that perhaps I might know a single windmill fact having correctly identified him as a smock mill. It turns out the difference between the two is because the former is cylindrical and made of brick/stone not timber. He dates from 1866 and is privately owned. I have to say he's definitely in the rather scruffy "little brother" category....you know the one with the dirty face and scabby knees. Hopefully he'll see a lick of paint before too long. 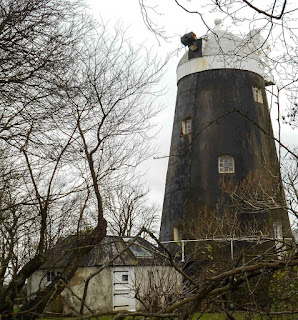 This is Jack's rather more well turned out older sister Jill. She's a Grand Dame and will be 200 years old next year. She's a post mill and was restored to her former glory in the 1950s. During the Great Storm of 1987 her sails caught fire, but thankfully she was rescued in time and nowadays she occasionally comes out of retirement to grind some of the locally grown organic wheat. She's benefitted from the lockdown as it's given the volunteers time to take down and repaint some of her sails. The young man we spoke to said that he's set up a table in the carpark a couple of weeks ago filled with bags of flour after they'd been milling and was amazed to sell 50 bags in the first hour! It's free entry, but you can only go in one at a time at the moment. 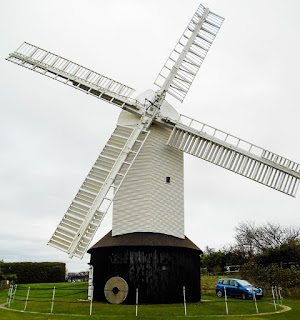 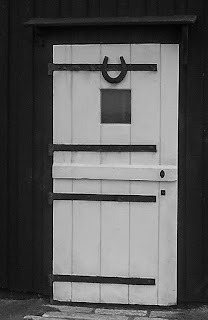 There can't be many places in the country where you can see two mills right next to each other.....
Arilx
at November 26, 2020