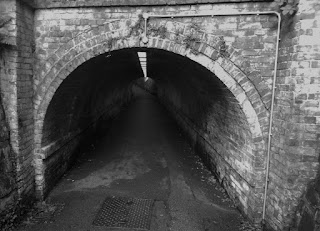 This tunnel leads from the main road into our town park and was built by the Hurst family in 1840 who were the then landowners. Originally it was there to allow the carts to transport the vegetables from the gardens to the main house, but now it's used by the public.
Frankly I haven't used it very much over the years as it always used to be very dark and gloomy down there. If it rained you got cold water dripping down your neck! Only recently has it had the lighting put in. Recently I learned that it had been used as an air raid shelter during WWII. At that time it had additional staggered partitions built out from the walls to create a zigzag path and prevent any potential bomb blast from harming those taking refuge there. If only walls could talk...very sobering really.
Arilx
at January 20, 2021