Stations are places for rushing around in by and large I think. Occasionally I have paid attention to some of the Victorian grandeur on full blown display in some of the London ones, but our one is just a squat and unremarkable affair. I read a comment about its completion in 1938 and the Art Deco styling only last week and it rather surprised me. Art Deco? What Art Deco? It seemed a good focus for the walk I had planned for last Friday's most recent local jaunt around the town. Now I've been told it's plain for all to see!! 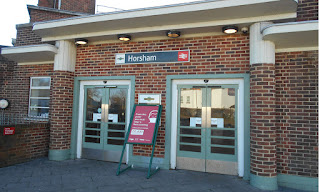 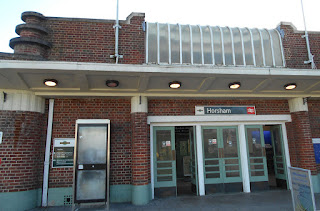 Up for a spot of spontaneity for a change I decided to continue to wander in whatever direction my feet took me and once again I found myself in the area of my old stomping ground from 25 years ago. This church was on one of my regular routes back then and had you asked me at that time what I thought of it I'd have probably described it as being "as ugly as sin." In some respects I still would agree up to a point....red brick modern churches don't really do it for me. This one is called St Leonard's and at first glance has all the charm of a 1950s secondary modern school! 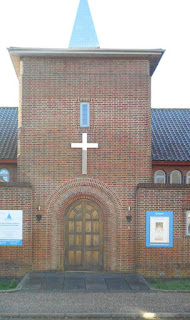 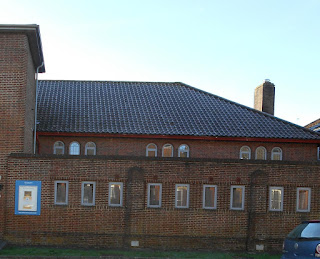 As I walked round the corner though I started to notice some of the fantastic angular detailing on the brickwork...the quadruple pillars that make up the window frames and how the cross has been created. Then I spotted the door and it instantly put me in mind of the multi arched Romanesque doors I have been fortunate to see on my travels. It is very beautiful and made me curious. I'm a great believer that every building has a story to tell, so I made it my mission to find out more. 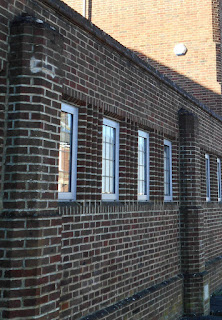 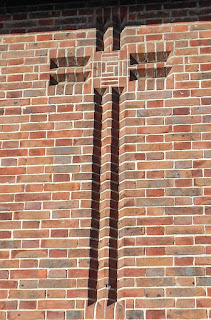 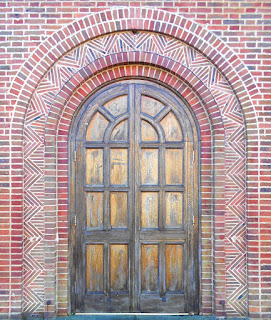 The church was designed in an Art Deco style with a strong medieval influence by the architects Godman and Kay and built in 1939. The original plan was to include railings and a metal spire, but this was omitted because metal was needed for the war effort. The perforated steel spire you can just see didn't arrive for another 70 years...on the day it was meant to be installed all the great and the good had gathered for the traditional topping out ceremony only to find that the star of the show was not present. Hilariously the spire had put in an appearance down at St Leonard's On Sea instead...some 50+ miles away. It did eventually show up some two hours late! The other claim to fame is that the Rolling Stones performed in the church hall on 3rd August 1963. Art Deco features heavily in many buildings of the early decades of the twentieth century, but it is rare on churches and there are only a very small handful in the country.
Arilx