The recycling volunteering I do requires me to pop up to our wombling sheds behind a church every few weeks to pick up the bottle tops that I bring back here to sort and then deliver elsewhere. I like to go in the early evening when it's quiet and there's no issue with parking.

On my last visit all seemed as normal as I hauled bags back and forth until I became aware of a whirring noise...to my surprise I turned to see a cheeky little blighter like this one sitting inside the shed. 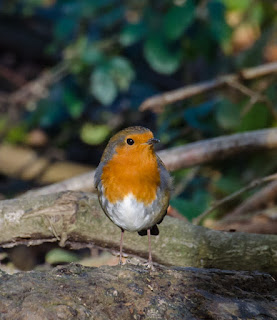 Laughing I chided it and warned it that it would get shut in the shed overnight if it wasn't careful, but it paid no heed and I must have had to turf it out half a dozen times. It let me know that it was underwhelmed that I had arrived without a snack for it and guilt ridden I promised to do better on future occasions when I returned to work alongside my fellow wombles.

True to my word I arrived at the next session with a carefully chosen selection of meal worms and suet pellets which I dutifully scattered and enjoyed watching the antics of two robins flying in right under our noses and feasting [they've got young in a nearby tree]. However, much like myself they seemed just as keen on the crumbs in the bottom of the empty crisp packets we were tipping out prior to packing them. Who doesn't love a snack eh! I've now found out that I'm not the only volunteer that had their conscience pricked by these feisty little birds...they now have their very own bag of bird seed sitting on the shed shelf so that they can be fed whenever they're feeling a little peckish! I should point out that there are plenty of insects and proper wild avian food available for them too where we are based.