What does a wildman [or woodwose as they are also known] and two green children have in common? If you live in Suffolk you may well know the connection lies in Ralph of Coggeshall who was the 13th century abbot of the abbey of the same name and an English chronicler. His "Chronicon Anglicanum" covered the third and fourth crusades, but, also a handful of lurid tales of English wonder that would have appealed to a medieval audience.  It is thought that Ralph travelled around East Anglia and collected the accounts first hand. Thus they are presented as being "true"

This depiction of the wildman is to be found on the church font in Orford. Ralph wrote about the naked human like being that the local fishermen caught in their nets one day. He was bearded and completely covered in hair. The story goes that the constable at the castle had him imprisoned and tortured, but the poor soul didn't make a sound throughout his ordeal. Eventually he escaped his captors and Ralph speculates whether he might have been some type of fish in human form.

As outlandish as it might sound the information boards inside Orford Castle speculate whether perhaps a shipwrecked sailor rendered speechless by the trauma of his experiences might have been caught. More colourful suggestions were that it could have been an evil spirit hiding within a drowned man. 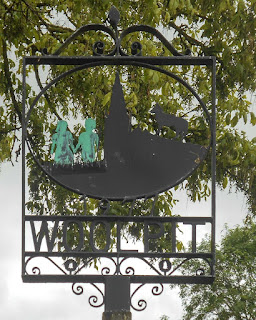 In the Suffolk village of Woolpit, Ralph recalled how the local peasants discovered two green children at the edge of a pit. They didn't speak in a tongue that the others could understand and would only eat green beans. The young boy didn't flourish and sadly died soon after, but his sister thrived and over time her body lost its unusual colour. She was baptised and lived with a knight's family. He is namechecked in other accounts as being Richard de Calne who was a personal friend of the author. As she grew into adulthood it's claimed that she was called Agnes and went on to marry the Archbishop of Ely, Richard Barre and that they might have gone on to have had a child.
As Agnes mastered the language of those around her it was said that she had declared that she came from a Christian country called St Martin's Land where everything was green and very dark. One day she and her brother came across a cave and heard bells inside. Going in they found themselves in the strange land where they were captured. Once again there is an interesting theory which might explain this extraordinary tale. The Woolpit museum booklet [now in my possession!] suggests that the children might have been the sole survivors of the Flemish mercenaries who the Duke of Leicester [Robert de Beaumont] brought over to help him in his fight to depose Henry II. His men were massacred in a nearby village and the little ones might have eaten only berries and leaves before they were found. With a lack of iron they could have suffered from cholorosis which turns the skin a shade of green. It certainly sounds plausible.
As a keen amateur folklorist this is absolutely fascinating for me. I have to say it was purely coincidental that we were staying so close to Woolpit.....I'm not sure Mr GBT was entirely convinced by my protestations of innocence though👽💀👀😈
Arilx
at June 28, 2021