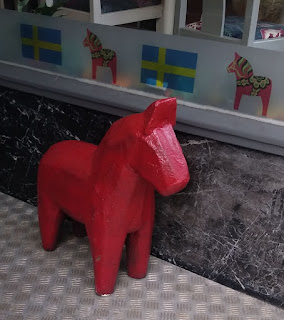 This is a rather larger example of the lovely Dala horses that you normally see. It sits in the entrance to a Swedish cafe we have in Horsham. I used to think that these wooden horses were just Christmas decorations, but they are on display in homes all year round. The name derives from the Swedish region of Dalarna where plain ones were carved by the woodcarvers as children's toys. They can be dated back to at least the 15th century, but the discovery of wooden horses in Viking graves suggest that they may be part of a much older tradition.
Nowadays many are painted in a style heavily influenced by the floral painted patterns seen on furniture and often the base colour is scarlet which is known as Falun red. It is derived from the copper mining in the same area. Whilst these horses may be familiar to many outside of Sweden now they mainly came to prominence after they were first shown at the 1939 World Fair held in New York. Since then they have become a national symbol and are often given as gifts at significant celebrations to bring good luck.
Arilx
at December 02, 2021