Last month we travelled over to Hampshire to have lunch with Mr GBT's sister. On our last visit I'd discovered that we passed a church with some items of note that I quite fancied having a quick look at. Whilst I wouldn't make a special trip across it seems daft not to just drop in as we were over that way anyway...I promised I'd be no more than ten minutes.

Corhampton church is one without dedication, but what is definitely known is that it's Saxon in origin. It also has some rather fine medieval paintings, but I'm sparing you those.

One Saxon sundial set into the outside wall. It's made of sandstone which differs from the main fabric of the current building so it's known to predate it. Those leaf shaped motifs on the end of the spokes denote eight "tides" rather than the the twelve hours we're more accustomed to in the modern versions and the hole in the middle would have taken a gnomon. 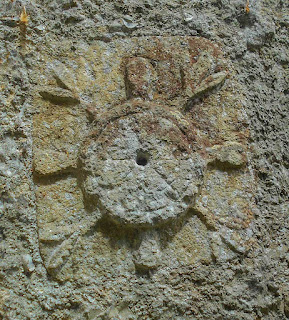 This is a Saxon [or possibly medieval] Sanctuary chair or fridstol [meaning chair of peace] as the Saxons would have called it. Once seated in it you could claim sanctuary and not be arrested within the church. Other churches round the country have sanctuary knockers mounted on their front door which served the same purpose. I wonder how often people used them in this way? 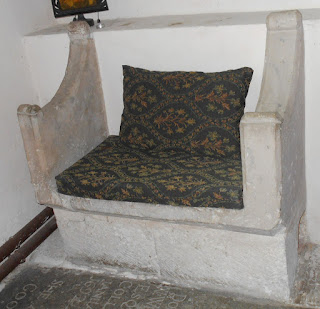 I stuck to my agreed time limit and have to say it was most definitely worth breaking the journey for.
Arilx