The Winkle Club [titter ye not!] was established in 1900 by a group of fishermen in Hastings who drank at the same pub and wanted to do their bit to raise money and ease the grinding poverty suffered by some of the town's local children. They took as their symbol the winkle which is found all over the beach there and each member had to carry his own shell [now filled with sealing wax]. Upon being told to "winkle up"everyone had to produce their shell with those who couldn't paying a fine which would go towards their fund raising efforts. The same rules apply today https://winkleclub.org/about-us/.

Some of the early members sounded proper characters. The King Winkle suit adorned in silver painted  shells was made and worn by Walter 'Slogger"' Hoad and then we have Alfred 'Biddy' Stonham who was not only a fisherman, but also a member of the lifeboat crew. However, he was most well known for the acrobatics he performed on his tub near the pier to amuse all the holiday makers. The most exclusive of members are those who receive the "golden winkle"...amongst those are Prince Phillip and Sir Winston Churchill.

The club continues to the present day organising events and raising money. There is now a designated area near the old town aptly named Winkle Island. At its centre it has the most stylish collection box I've ever set eyes on. Isn't it fabulous! 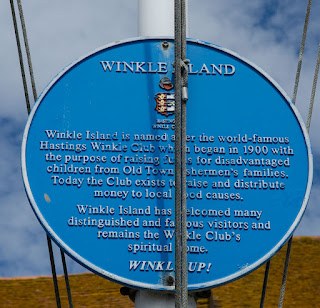 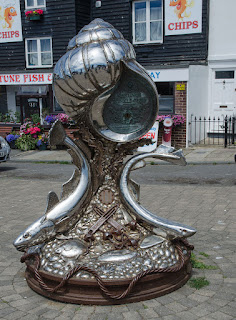 Am very slowly catching up on the backlog of posts I've got in mind. In the meantime have a great weekend. We're having friends over for a BBQ and to celebrate B's 60th birthday.
Arilx