Now being of a gnat bottomed disposition I do have my reputation to uphold you know. Therefore a train trip to London is a train trip not fully utilised if you only have one adventure. Racy old devil that I am had looked beyond just visiting 18 Folgate Street...instead I dragged Mr GBT and les parents to the current Celts exhibition that's running at the British Museum until January.

Once again no photography allowed but I can legitimately show you some of the exhibits that we saw as these are my photos from a previous visit. The museum have brought together items from across Europe into a most amazing display as it tracks the art of the different "Celtic" tribes [there wasn't a race of Celts and even the geographical location of those people who fall within this definition have changed over time] as it influenced those from the Romans right through to the present time. The beauty and detail on the items shown was stunning and they ranged from household, to jewellery, grave goods and weaponry. I won't reveal too much as I don't want to spoil it for those who might be yet to go.

The highlights for me were the huge range of torcs on display. I hadn't appreciated that they were used as a means of identifying yourself with other members of your tribe. The heaviest one weighs 1kg [the single one in the photo] and the styles and patterns vary enormously. One wouldn't have looked out of place in a Steampunk context- it was like a huge metal cog! X rays of broken ones retrieved from hoards such as Snettisham have revealed that the wire ones were make by wrapping the metal around a hazel core. 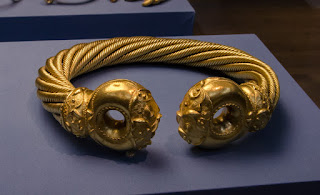 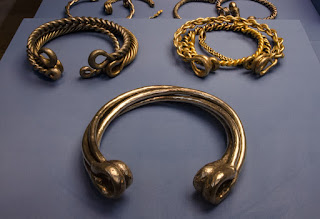 There were a variety of cooking vessels on display along with shields and helmets. Some familiar to me others not so. I still love this horned one found in the Thames- it was most likely to have been a votive offering to the Gods and the tiny birds on the spit and dragon on the flagon. 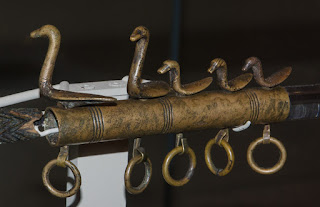 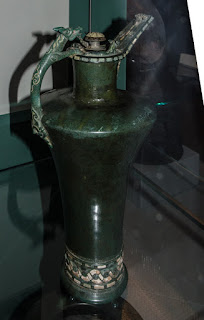 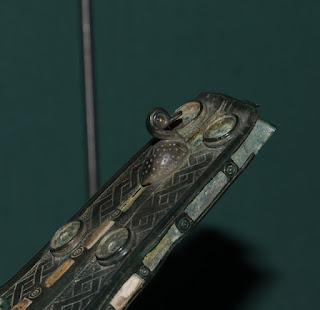 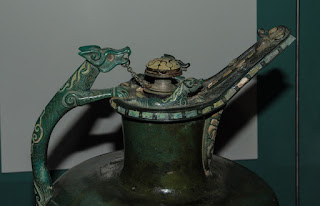 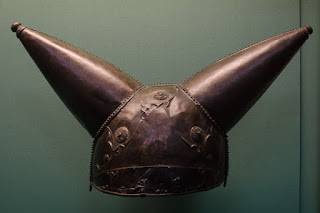 However. the absolute star of the show for me and indeed the reason that I decided to part with my hard earned wonga was the Gundestrup Cauldron. I have often admired it on television but never, in my wildest dreams, did I expect to see it in the flesh so to speak. It was discovered stacked in separate pieces in a Danish peatbog in 1891. Made from silver it is huge and decorated to an extraordinary level by many hands over many years. Each panel tells a different story of Gods, wars, mythical creatures. The most easily recognisable figure is the Horned one who is traditionally thought to be Cernunnos. As I can't put up any photos without clearing infringing copyright I shall close with this rather amusing little clip of one of the tales which has been animated. The instrument they are depicted playing is a carnyx