Lewes, let's just say, goes to town just a little when it comes to bonfire night...erm understatement. Flamin' Ada or should that be flamin' Guy?!

When we danced at The Snowdrop last month Mr GBT took a photo of this: 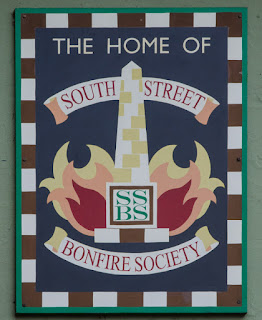 Naturally my nosey bone has been twitching ever since. I vaguely knew it was a bit of a big deal with lots of people going but hadn't appreciated just how huge it is. 3000 people participate and 80000 spectate. There's flaming barrels, five separate bonfire displays and lots of controversial effigies of whoever is not flavour of the month with the masses at the present time. As the website quaintly put it- it's not an event for a yummy mummy with a pushchair! The evening is a celebration of the failure of Guy Fawkes and the infamous Gunpowder Plot along with a commemoration of the seventeen Protestant martyrs who perished under Mary Tudor [marked by seventeen burning crosses] and those who lost their lives during the World Wars.

There are lots of Bonfire Societies in the country but Lewes seems to have the most well known and at times the ones with the most chequered histories. Started in the 19th century some have fallen by the wayside whilst others have been resurrected within the last few years to bring the numbers back up to six. Each have their own Pioneer costumes and smuggler jumper colourways. The South Street Society's First Pioneers is the Colonials [1750] and the second is the English Civil War. Their jumpers are brown with cream stripes. The most controversial is the Cliffe Bonfire Society. Despite attempts to curb their activities, they continue with the traditional elements as they carry their "No Popery" banner and burn an effigy of Pope Paul V [1605]. They have responded by marching alone, buying their own firesite and forming their own firework company. Their membership is swelling and I along with them applaud the stand they've take. In their own words "...Cliffe has relished the notoriety surrounding its controversial activities."