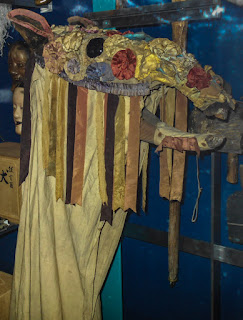 The Mari Lwyd [meaning grey mare, although this translation is disputed in some quarters] might just come knocking on your door at this time of year if you live in South Wales. This is one of a number of styles of hobby horses which are seen around different regions in Britain at various points during the year. I saw this particular example earlier in the year during my visit to the Horniman museum with Lovely Grey.

Unlike the wooden hoodening horses, this one is a slightly more macabre version. Normally made from an actual equine skull, it is bedecked with ribbons and bells, mounted on a pole with a white sheet hanging down to allow it to be operated. Many have the jaws articulated so that it can snap open and shut unexpectedly startling and frightening the audience by turn. Taking the beast from door to door along with the ostler, Punch and Judy, the sergeant and the Merrymen, it is traditional to sing a verse of a song to try and gain entry. By turn the local homeowner refuses entry by way of a witty sung riposte [known as pwnco] and this continues until finally they are allowed over the threshold for cakes and ale.

The custom was first recorded in the early 19th century, but I like to think it goes back much further than that. Knowing how old the Uffington White Horse it doesn't take a huge leap of imagination to think that the horse has been an important part of our folkloric and magical traditions for a great deal of time.