It has to be said that in times of yore around Christmas our ancestors knew how to celebrate in style and throw one helluva party....none of this namby-pamby couple of days off, back to work and then one day for the New Year before nose to the grind stone once again. I can't even imagine partying for twelve days straight let alone having the energy left for the revelry of the big night which topped it all off.

Starting in the Medieval period, the Twelfth Night Revels are legendary [except for when the party pooping Puritans got their paws on it and banned any form of behaviour which might have been construed as fun] as a period of dancing, gambling, feasting and of course drinking. It was marked by rowdy behaviour ...a time when normal rules were turned on their head and the accepted order was temporarily suspended. The Twelfth Night cake was at the centre of this display of mischief....whoever found the bean, pea and clove in their slices would assume the roles of King, Queen and Knave and oversee the evening's entertainment until midnight when their reign ceased.

The original cake was very much along the lines of the traditional one we make today with dried fruit [then a luxury ingredient], eggs, flour, butter, sugar and spices. Over time its design became more refined until it emerged in its early Victorian form decorated with sugar icing and various motifs, the crown being a popular one. This example was on display as part of the Christmas Past exhibition at the Geffrye Museum. 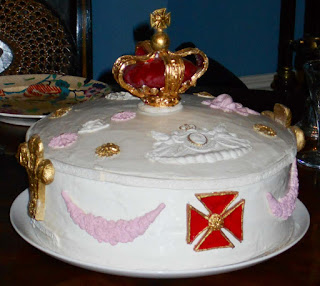 Sadly the tradition disappeared with the industrialisation of the country, but I am pleased to see that with the renewed interest in wassailing, many are beginning to mark Twelfth Night once more.