The Other Royal Family

We're talking Royalty of the Pearly kind here. Beyond knowing the Pearly Kings and Queens as an iconic symbol of London I've only ever glimpsed them on the box at big Royal occasions and frankly I thought vaguely that they might perhaps be something to do with the old music hall traditions...in other words "I ain't got a Danny La Rue"

As ever, being somewhat behind with my blogging, I was tickled pink unexpectedly to see the real deal a few weeks ago at the Hackney Half Marathon. 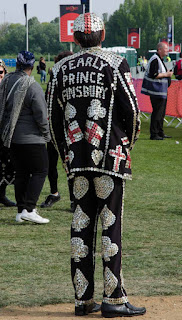 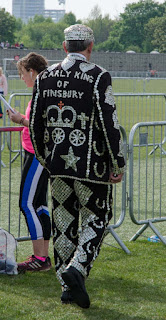 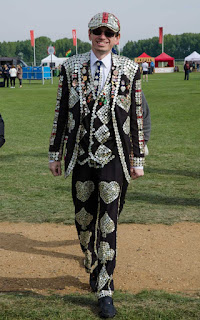 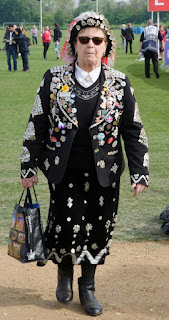 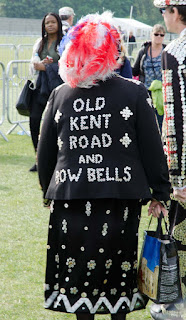 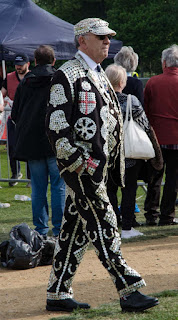 This encounter has set me off on a quest to find out a bit more about the Pearlies as they are known. Ready yourself for a few facts.....

First the history.....the tradition evolved after a young orphan called Henry Croft started work as a road sweeper in the London markets. Noticing that the costermongers stitched pearl buttons onto their garments to draw attention to their businesses he began to do the same in a bid to raise his profile and thus his ability to raise funds for various charitable causes. Over time he collected sufficient buttons from the streets to completely cover a suit and after a while the costermongers started to help him in his personal mission. By the time he died in 1930 he was thought to have raised £5000. The first Pearly Society was established in 1911.

Every London Borough has its own Pearly family. The title is inherited and the children are known as princes and princesses.

A completely covered suit is called a "smother" and one with fabric showing a "skeleton". The symbols picked out on them each have their own meaning. In my photos the horse shoe is for good luck, the cross for faith, the suits of cards for life is a gamble and the wheel is for the circle of life.

Each Pearlie family is associated with a church and their primary role is to fund raise for a wide variety of London charities.

Having found out a little more about what they do they sound like good hearted folk to me.