During my travels and time spent poking around churches I have seen carved scallop shells upon tombs from time to time. This one was from Exeter Cathedral and was indicative that the interred had been on a pilgrimage. 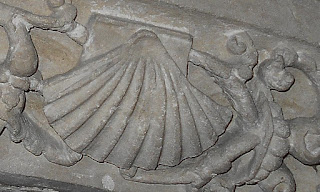 In the modern world there are those who still undertake such journeys for religious reasons....others for deeply personal reasons. One gentleman I know went last year to recover from the breakdown of his 30 year relationship. The time away gave him the space to think, grieve and make major decisions about how he wished to move forwards with his life. He returned in a much better place mentally.

This strange sculpture is called "The Universal Pilgrim" and again is in Exeter. I don't like the piece frankly, but what I do like is the sentiment of the message below it. 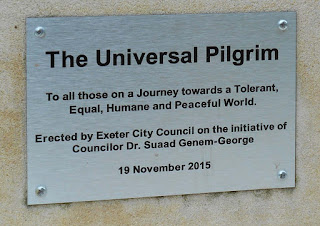