I guess having worked alongside other like minded people through the Sussex Green Living initiative these past few months it's reminded me of some of the projects I'd like to see locally....a scrap store, a facility to buy the stuff thrown away at the tip and some sort of lending library/swap shop would be on my list. Actually I'd really rather like to replicate Totnes, but it's a very different demographic here with a tendency to be far more conservative. However, we keep plugging away and gradually more of us are coming on board. Positive change takes time, but the good news is that following on from successful upcycling workshops and a monthly Ecover refill station run by the Quaker church we are launching a monthly Repair Cafe [not my baby I hasten to add..the work of some of the others, I'm still the recycling sorter and now a moderator on the FB page] in October to give people the chance to learn new skills. Gradually as we attend more events we are drawing more interested parties on board and as we all know there's always strength in numbers.

Whilst travelling I had the chance to have a nose around the share shed run in Totnes...people can borrow tools for a nominal fee. 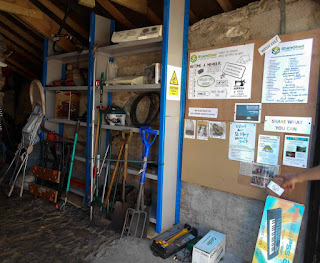 Then this week I was finally able to visit a book exchange in a local village where I work. Normally I have to head off to another client elsewhere immediately, but they are away so I grabbed the opportunity. Another fantastic scheme....racks and racks of books which you are free to help yourself to and donate your own unwanted books if you want. It's also a chance to have a cuppa and a chat. I brought home this little lot which should keep me out of mischief. Probably best that I can't normally make it otherwise GBT would be groaning under the weight of it all! I shall keep the circle moving and pass them on when I have finished them. 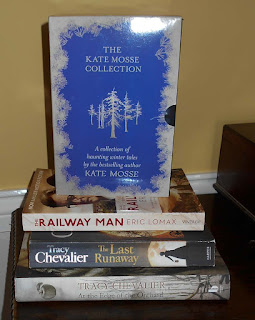 We had our stand at the free concerts in the park earlier this month. Each group was able to say a couple of words about what they do on the stage between the different bands and in our case we also [very much tongue in cheek] sashayed across in front of the audience modelling various garments made out of men's ties. Afterwards a very enthusiastic gentleman came to talk to us.... his line of work is organising the recycling of the fabrics collected at some of the tips in Surrey. Not only that, but he's also involved in the Reuse shops they've got on site and thinks he can help us to achieve something similar at ours. Here's hoping.....we're going over to see the shop next month. Not everybody's idea of a fun day perhaps, but I am fizzing with excitement at the prospect!

Just to end here's one of my teeny recent pale green micro steps I've taken....for some reason it's taken me ages to pluck up the courage to do this one simple thing. Wrapping my Mum's birthday pressie in a headscarf rather than using sellotape and paper....she's returned it to me so I can do the same again. Besides I loathe wrapping gifts and this so much easier! 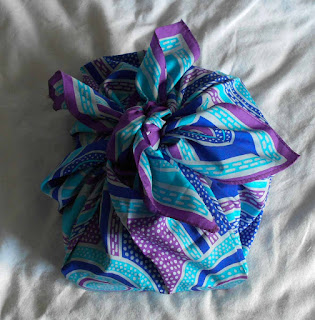