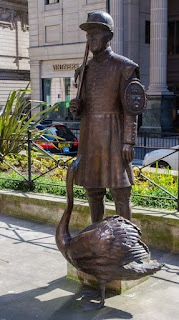 This week sees the 800 year old custom of Swan Upping taking place. Originally swans were seen as a great delicacy and ownership of them was fiercely protected. Nowadays the emphasis has changed to one of conservation and education rather than culinary!

During the third week of July the swan uppers take to the river Thames in traditional skiffs to catch any adult birds with cygnets. No harm is done, but it is a valuable opportunity to check the weight and health as well as recording any new ones on the database. The Queen can lay claim to any unmarked mute swans [her uppers wear a scarlet uniform] and ring them. Since medieval times the swans can also be claimed by the Dyers' and Vintners' Livery Companies [the chap in the photo is a Vintner] and ownership can be distinguished by additional rings on the other legs. It may seem a rather quaint thing to do in this day and age, but it provides important data on the numbers and how the swans are faring.