Yes it definitely was a rubbish outing on Tuesday afternoon, but one I weirdly enjoyed....a tour round the local Biffa plant where all the black bag refuse ends up. I thought it might be pretty grim [images of the old landfill sites swirling round my head] and it certainly ain't pretty, but there's good work going on and a lot less stuff going in the big hole in the ground. 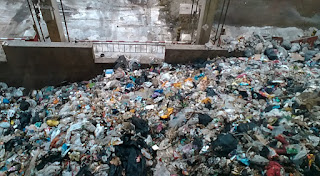 This pit has to be emptied of all the waste on a daily basis. The "spider" as it's known picks up the load and passes it into a machine which empties all the bags. It's then put through a shredder before starting its journey through the machines which sort it all into different waste streams and remove all the recyclable materials. 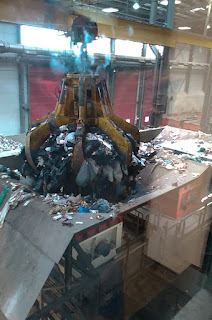 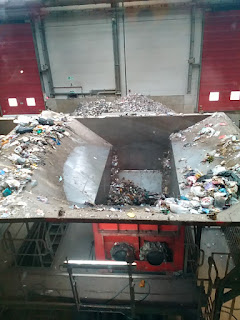 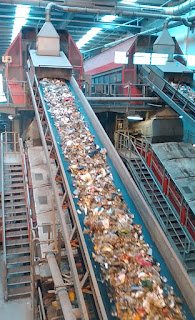 This is where the magic starts to happen. All garden stuff is separated and sold onto a company who turn it into compost, sand/grit/broken glass goes to the construction industry and all the combustible stuff like cardboard, plastic bottles etc is turned into Refuse Derived Fuel [RDF] and sold to Germany and Denmark who use it to fuel their incinerators [all the energy produced from these is used to power the local houses]. The incinerator route is hugely unpopular in the UK, but those European countries who have the highest recycling rates all use incinerators. I don't know enough about this issue to make an informed decision. The RDF contract is a new one and should see the amount of stuff being sent to landfill reduced from 50% to 80% over the next few years. 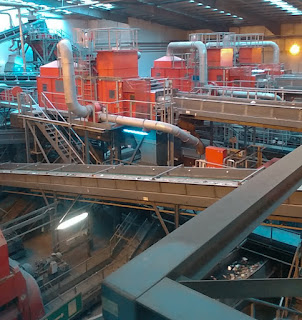 The biggest area of recycling is the retrieval of all the waste food people have chucked out. Through various processes it is taken off first and divided into liquid and solids. The site has huge anerobic digestion tanks which turn the resource into biogas. This is used to generate electricity to run the plant and the excess is sold to the National Grid. The solids makes a very rich material which is used on brown field sites. You can see the final product in the back of the trailer. 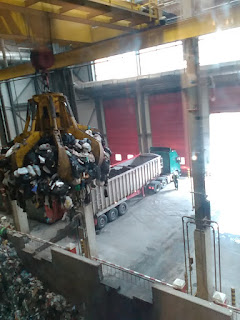 It was interesting to learn just how differently things are done nowadays and what trials are being carried out- food waste, kerbside electrical collections and how to deal with nappies. Hopefully these will be successful and go some way to further reducing the black bag contents. Some are very resistant to change and 30% of potentially recyclable materials along with 30% food waste is still being thrown in with the general bin contents. Landfill remains the most expensive option.

The place itself is run on as environmentally friendly basis as possible. All the rain water is harvested for the toilets and the buildings have solar panels. They now have three nesting pairs of red kites [they are fairly new to this part of the world] who do a good job along with the five official birds of prey they have at deterring the scavenging gulls.

The present landfill site closes in June, so we shall have to wait and see what happens next. The Biffa chap who took us around strongly suggested we pay a visit to the high tech recycling plant down on the coast to see the other side of the business and get a fuller picture, so that's hopefully on the agenda to go along with the lady I went with for later in the year. It's non stop glamour here for sure!