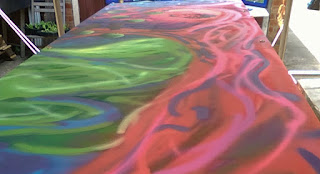 Sometimes you have an experience which is like no other. This happened to me last week when I went to the wake of a lovely chap who died too young from cancer. He wasn't a chap I knew terribly well, but I've known the family for a long time now and they invited me along. R was a gentle chap, laid back and always one his friends could turn to in a crisis. The one thing he didn't like was formality of any sort and he was quite adamant that his send off should reflect his take on life.

To carry out R's wishes the family went off piste. Rather than the traditional service, funeral directors and flowers the coffin was ordered online and decorated by his closest friends with quotes and symbols which were personal to him. They were able to collect him from the mortuary, have him present in the garden whilst they celebrated his life and then drop him off at the crematorium a couple of hours later. Somehow having him there and being able to stand around sharing memories, tales of his exploits and shed a few quiet tears just seemed so right. There was a pile of green sticky notes in the shapes of apples next to the coffin so those that chose to could write messages. The making and drinking of cider was very important to R! He left as he had arrived on the back of his friend's trailer, but this time to a round of bangs as we all let party poppers off!

I had permission to take photos and the family have already shared images on social media.