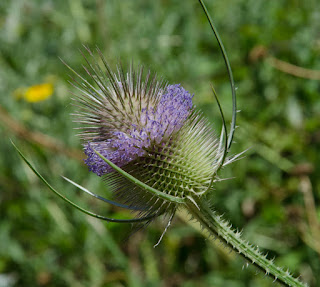 July and 'tis Teasel time. Rather a striking architectural plant whatever the season it's very attractive to the bees as this time of year and many has been the time I've seen flocks of Goldfinches feasting on its desiccated heads in the colder months.

The old country name of "Brushes and Combs" harks back to when it was used to comb the wool or tease it [hence its more familiar name], but it's also been called Venus Basin in its time. The rainwater which collects in the cuplike formation of its leaves traditionally was thought to ease eye conditions.

Apparently in ancient Ireland this was the plant of choice for the first layer of the thatch and it crops up as the companion plant of the Germanic household Goddess Hulda. I've certainly seen it used in crafts and as part of floral arrangements. A blue dye can be extracted from the dried flowers. Recent research suggests that the roots might be able to combat Lyme Disease, although further testing is needed.

We simply enjoyed the spectacle of banks full of Teasel and Fleabane on a recent walk we went on. 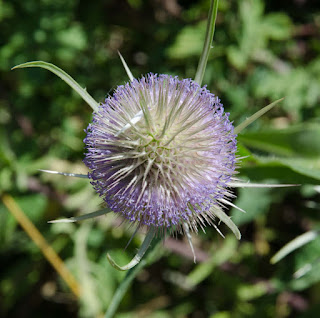