Mary had a little lamb.

Yes she really did and yes it did follow her to school one day. Her teacher, Miss Coward, was unamused at the kerfuffle her little hand reared ovine pet caused and banished it from the classroom apparently.

Mary Hughes was the daughter of a Welsh sheep farmer and often used to help her father out by feeding the orphaned lambs using an old teapot. On this particular occasion three sisters from London were visiting the area and upon hearing about the incident one of them, Miss Buel, penned the famous lines. Or so the theory goes...if you read the Wikipedia entry it claims its origin is American!

Whatever the truth Mary Hughes moved to the South coast in later life and is buried in the Broadwater Cemetery in Worthing. The lamb on the top pays homage to the tale. 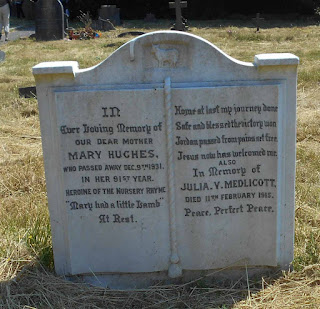 As for me? Well I was doing you might wonder? Attending a themed tour called "Scandal and Intrigue". This was nothing to do with the talk I hasten to add I just happened to notice a sign highlighting this little gem as we walked past.