The man himself...Mr Gilbert White posing with his pet tortoise Timothy [he also had a spaniel called Fairy Queen who quite often strayed and a pony called Mouse]. As the local curate in Selborne, he might never have come to national attention had he not been a keen naturalist in his spare time. All the changes around him were a source of fascination for him and he spent many hours observing the wildlife from his revolving hide [a converted port barrel] set up in his grounds. 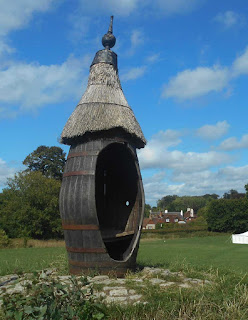 [This is a copy of the original]
All his observations were recorded in letter form and eventually he was persuaded to publish them in book form. The original manuscript is now held inside the house. You can now read it for free from here http://gilbertwhiteshouse.org.uk/manuscript/ 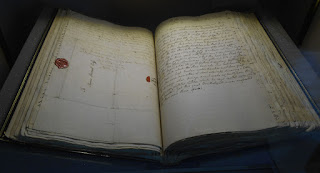 The house and grounds are a delight. Plenty of information without getting too bogged down in detail and several little lighthearted inclusions which gave a more rounded impression of Gilbert White. He was certainly a man with a dry sense of humour who enjoyed his wine and entertaining.The rooms themselves have retained that homely feel and it is as if he's just out of sight round the corner still. This is his study where the magic happened. I couldn't help but wonder what he'd have thought had he known that his work was to influence the likes of Darwin further along the line. 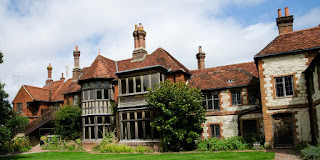 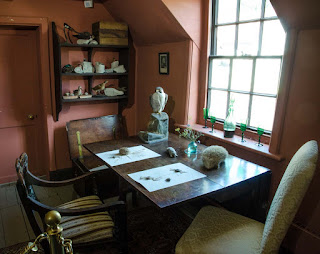 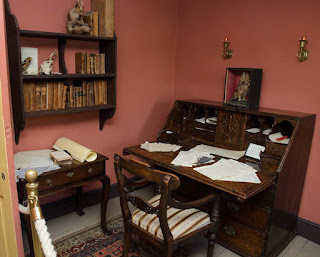 We took more photos, but I just wanted to create an impression rather than give you a blow by blow account of our visit. For those thrifty souls like me there's a two for one entry voucher here which we took full advantage of https://www.hampshireattractions.co.uk/vouchers/ Just to warn you when you get the email link you need to download the file and then open it with your internet browser and then print it out. It took us an age to suss it as it's not clear it's a web page.