It's been an age since I've put up any mystery objects, but I encountered a whole gamut of them on my weekend jaunt. Some were familiar yet these were not. Any ideas? 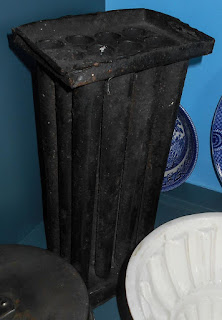 Thankfully each had its own set of explanatory notes. I'll put the answers up tomorrow for those who'd like to know.

In order of appearance the items were a candle mould, a rolling pin for crushing things and a pineapple shaped icecream mould.
at August 21, 2018