Not all of the South Downs Way I hasten to add....just a little smidgen! As ever there were things I was expecting to see with a goodly lot of surprises sprinkled in along the way too.

West Sussex is well known for its horse lovers. Hand on heart though I can honestly say this is the first time I've ever seen a sign warning me about them [bulls yes horses no]. It all became much clearer when I looked back up the hill and saw a series of jumps...that would explain why they might be going like the clappers on their descent. 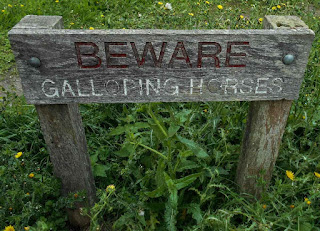 With it being the end of August and more like an October day, I didn't really expect to see much in the way of flowers, but I'm glad to say I was proved wrong and many of the usual stalwarts were to be found. These two were new to me [assuming I've got the id right that is of course!] 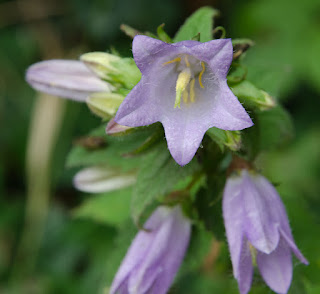 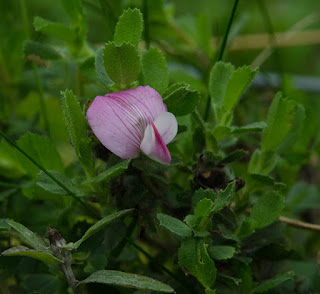 We'd started off from the small Sussex village of Washington and were soon away from the roar of the traffic and into the treeline. All around us I could see earthworks...some I recognised as Neolithic flint mines and others were described vaguely as "tumuli" on the map. Some perhaps are the remains of ploughed out burial mounds, maybe others were field boundaries or Ironage ditches. An aerial view would probably make them easier to decipher. This lovely little bridge we came upon seems to have a great age to it and that seemed to set the tone for the walk as we came to the settlement of Sullington. 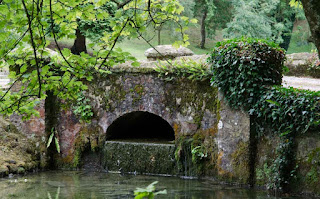 The village itself has developed away from the original centre around the church and the manor, so what you're left with now is a remarkable set of buildings which has remained largely unchanged for centuries. In the first photo you can see how close the church is to the manor house. The ancient tomb just inside the door is believed to be one of the De Covert family who were lords of the manor. He was possibly a Crusader, but the crossed legs which is quoted in some sources as a symbol of this is a bit of a red herring as the style continued after the wars had ceased. He's certainly suffered rather over time, but I did rather like his detailed chain mail. 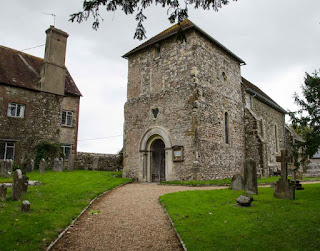 Next door is the Manor Farm which has one of the largest tithe barns in the county. It's such a big beast that Mr GBT couldn't fit it all in his photo. This, along with the workshop which now houses the new cafe [see yesterday's post], has been recently restored. The beams are inside the latter. 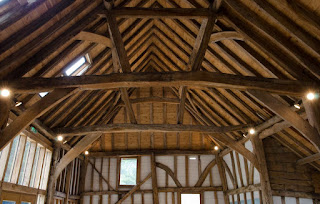 The walk's instructions told us to cross the A24 to get back to our starting point, but I'm afraid I didn't much fancy taking my life in my hands on such a busy dual carriageway, so we doubled back. Had we not we would have missed this final little gem tucked away at the summit of the hill. A memorial seat with a difference...a view from every side. 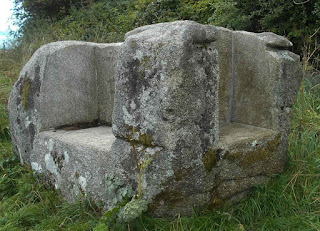 Upon recommendation we used this walking site for the first time http://fancyfreewalks.org/ The instructions were clear and accurate for which I'm most grateful. There's nothing like a grumpy Aril when she thinks she's nearly back and then finds she's gone wrong!!