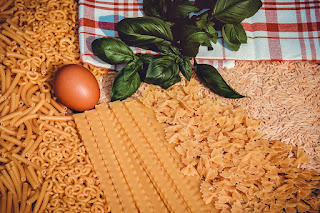 Before the summer break TYM was a whizz at cooking omelettes and pasta which is fine, but is only going to get him so far when he's in a shared house at uni from September. He does a lot of exercise and has a healthy diet, so I promised to make sure that he has mastered a few more of the basics before launching him on his very own culinary journey of discovery.

Technically food tech was taught at school and we've dabbled from time to time, but it's all been rather intermittent. Last week the lucky devil got to trail round the supermarket with his Muvva as we talked about ways of keeping to a budget whilst eating well. It's surprising what you can cover in a short time as we nattered about all sorts like seasonal veg, what's good to buy frozen, short cuts when he's tired or rushing. I showed him the two breaded mushrooms which were selling for £2.70...I didn't knock them, but he stared at me agog when I explained just how quick and simple even for a reluctant cook like me they would be to knock up.

It's been a great reminder for me of all the things I can do whilst showing him how I menu plan to incorporate leftovers [frankly I think there's more chance of him flying to the moon than menu planning] or schedule different dishes to use up anything which won't keep. Both me and his Dad cook, so we've taken it in turns each night and he's now got a few recipes under his belt. I've picked up a second hand copy of a veggie student cook book for him, so you never know we might be treated to a feast cooked by his fair hand one of these days....one can but live in hope!