A Devil to Photograph 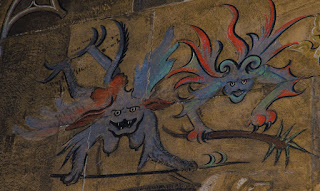 Hello I thought you might enjoy these two rather splendid blue devils I discovered lurking on one of the panels in the Lady chapel in Winchester Cathedral. Judging by certain details I am assuming it's Mr and Mrs Devil! I can't tell you just how excited I was to find this hidden away...it was all I could do to walk at a measured pace to go and tell Mr GBT and ask him if he could take a photo for me [it was too challenging for my little camera]. The temptation to gallop the length of the nave was all consuming, but I did remind myself that I was in church and such behaviour might be frowned upon [especially from a 53 year old woman who should know better!].

The original painting dates from 1500 and was done in oils on the stone walls behind the wooden panels upon which these copies from 1937 are painted. The earliest pictures of the devil were done in blue. There seems to be various theories as to why this is, but one suggestion is that the originally the devil was shown as a blue angel [Lucifer] before his fall from grace and his becoming Satan. The colour implied cold and being the furthest away from the warmth of God. As Christianity became more popular and polarisation between good and evil more extreme artists began to incorporate different features until he evolved into the red cloven footed and horned figure we know today.