After several months of not seeing one another [save for the odd long distance wave when I work up near her],my friend H dropped in for a cuppa and a natter on Sunday. Mr GBT made a big batch of raspberry jam recently, so a jam themed bake was in order for her visit. He made jam tarts [pastry refuses to behave for me] and I made a batch of these that I call Sticky Blobs. That's not my choice of name, but the one given in my Be-Ro Recipe book. However, I gather in some quarters they're called Cut Knees....maybe next time I make them I'll use apricot jam, lime marmalade or lemon curd because I can't now unsee that image in my head!!  I kept that little nugget to myself when I offered them to H😃 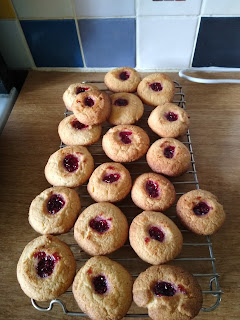 H has the friendliest little dog called Misty. She's a rescue one and part whippet. In time H has learnt the hard way that she's a most excellent escape artist and having made many successful bids for freedom she has broken into the neighbour's garden or got out into the fields behind. Obviously this is far from ideal and they have had to block every potential exit in their garden [their other dog has never tried to get out] to keep her in. This was working until recently when she resurrected her Houdini act. The family were perplexed because nothing had changed and they knew even she couldn't jump over the high fence. Last week she got caught in the act and her tricks were revealed.....she has discovered how to climb up the fence like a cat. Let's just say she's now on a long lead when she's outside until suitable adjustments have been made to prevent any further unplanned wanderings!!
Arilx
at August 25, 2020