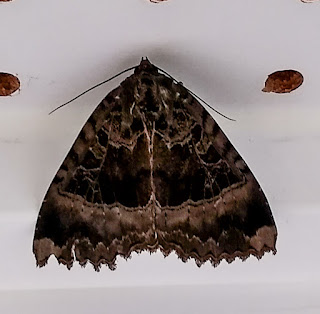 I think it's fair to say that I was much happier to discover this beautiful moth hiding in my client's sunroom on Monday than it was being disturbed by me wielding a feather duster! Rather disgruntled it settled for long enough for me to be able to grab my phone. With so many more species of moths than butterflies in this country and factoring is that many are brown it's a bit of a nightmare for a novice like me to identify them easily. Thankfully on this occasion I was about to ask for help on a suitable FB group when the first post on the feed came up with an identical image. It goes by the rather charming name of the Old Lady Moth and is another new one to me.

Many people seem happy to spot butterflies, but have a real aversion to moths. Perhaps it's because many are night flying. Folkloric associations tend to bear this prejudice out with certain white moths being interpreted as ghosts or ancestors returning. At St Non's well near Looe heaven help you if you didn't leave a bent pin for the fairies for you would be followed home by a mass of Pisgey moths. Certain colours also pertain to future events...a white one in your home meant an imminent death, brown one foretold of an important letter winging its way to you and a black one was a deceased soul reincarnated and just dropping by for a visit!

Would it surprise you to learn that I really rather fancy having a go at doing a bit of moth trapping [and releasing safely afterwards!]...when I looked into it though I found it was quite an expensive thing to do so a pipe-dream it remains. Meanwhile I shall content myself with the occasional discovery such as this!