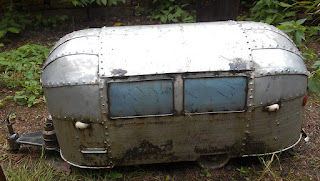 Lots of my friends [both Morris dancing and otherwise] have now bought camper vans and are pinging up all over the country. I am well known for my aversion to anything canvas/camping related [or any non flushing type of loo too for that matter] and have been on the receiving end of much teasing about this over the years. I enjoyed many camping holidays as a child, but it doesn't float my boat these days as they say!
We had a holiday booked for June this year, but it's been pushed forwards to next summer. I've been pondering how we might be able to give ourselves a break without travelling too far away. If we took a week off and had a staycation I think we'd probably end up trying to catch up with jobs at home, so I dismissed that option. However, I floated the idea with Mr GBT of taking a week's worth of days off spread throughout September to give us time to come up with some ideas depending on weather etc. He's given it the thumbs up so let the planning begin! We joined English Heritage last weekend [with a 15% discount....gnat bottomed to the last!] which will give us lots of new places to explore or even revisit without a small, bouncy person in tow as on previous occasions many years ago.
Have a good weekend folks. Having said I wouldn't have a camper van I could be tempted by this little sculpture of one that was at the Farnham Sculpture Park a few weeks ago!!
Arilx
at August 28, 2020