Not home from home.

Mr GBT and I stayed local again on Sunday with a short drive which brought us to the other side of town as our starting point.  With having living here most of my life it should have felt familiar yet I've never walked nor driven through some of the hamlets it took us through. It all felt rather surreal to not recognise anywhere, yet in a good way it felt rather like I was away on holiday for a few hours. Where there is exploring to be done there are things to see and maybe stories to be told......

I rather fancied a swing on that old repurposed tyre....however, seeing as the signs in the pictures below it came from the same farm there was to be no wandering off the public footpath [I don't trespass knowingly really!] 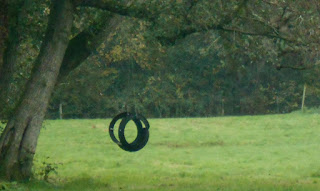 One local landowner has taken matters into his own hands as sadly his livestock has been attacked by dogs off leads on several occasions over the years. He's removed all the permissive paths and fenced it all off. This has not gone down well in some quarters..... 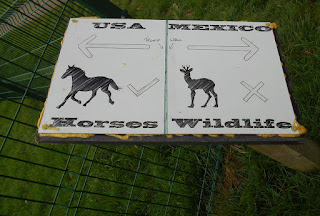 Now I love a rustic hand painted sign and this one does the trick....the little heart in the corner has a rather jolly smile!

Despite the misty conditions, the red foliage of this tree really stood out against the white house behind it. This property stands at the gates of the privately owned Sedgwick Park. Sedgwick Park House was where Alice Liddle [she of Alice in Wonderland fame] spent her honeymoon. There is also the remains of a Norman castle within the grounds which is now a scheduled monument. It's not accessible to the public. If you fancy buying yourself a new pad in the Sussex countryside SP is currently on the market....only make an offer if you've got more than 5 million quid though! 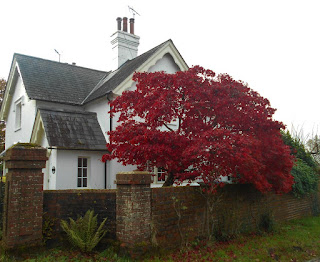 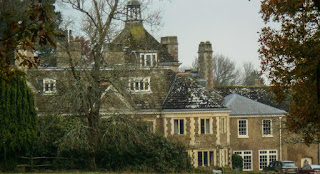 I have to say stumbling across a rather weather beaten Fred Flintstone in somebody's front garden wasn't on the agenda of expected things to see....I used to love watching the original cartoon on TV as a kid. Really corny, but some very imaginative details that were easy to miss. 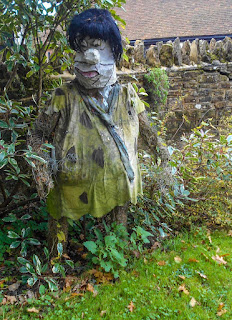 The final leg took us through part of Chesworth Farm which has now been turned over to a nature reserve. We parked ourselves on a bench to crack open the flask [it's seen a lot of service this year!] and I noticed this. Absolutely 100% agree with the sentiment expressed.