Nowadays Deerhurst is a tiny village and it seems hard to imagine that it was here in 1016 that Edmund Ironside and Canute signed the treaty which saw them cease fighting and agree the division of land in the North and South between them. Mysteriously Ironside died shortly afterwards and his share passed over to the Viking making him the first King to rule over the whole of England since the Romans. From the Norman conquest onwards Deerhurst began to lose its power and gradually slide into obscurity. However, it doesn't take much of a leap of imagination to see how it might all have once been....the signs are still there.

The more than substantially sized St Mary's church might just be classed as a parish church nowadays, but it started out life as a priory church and formed part of the larger Benedictine priory site [ the attached house is the priory farmhouse] which was in place by AD 804. Over time the lands were divided up and reallocated until the whole lot was dissolved in 1540. What we're left with is the most complete Saxon church in the country. It is a marvel of strange beasts and carvings which incredibly predate the Romanesque gems I usually vaunt on here. 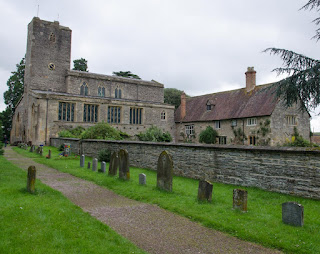 This one is known simply as the Deerhurst Angel. She sits up high on the exterior of the church, but she started her life on the inside of the original Saxon apse. Now all you have left of it is a semicircular line of ground level stone work which picks out where it once stood. 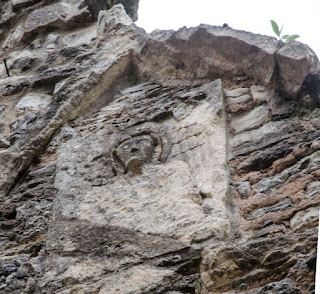 As you go through the main door you are greeted by these beast label stops on either side of the entrance. Those are quite large fangs they've got whatever they are and the traces of red show that they were once painted. To me they look quite canine like, but the general view is that they are dragons. To my eyes the carvings on either side of the chancel arch look far more dragonesque. Whichever version is correct or not, what we do know is that supposedly there was a Deerhurst dragon which enjoys terrorising the locals and snacking on their cattle. In a bid to stop the rapicious creature the King put up a reward for whoever killed it. One John Smith stepped forward and by leaving milk where he knew the brute would drink it he took advantage of its resulting drowsiness and hacked off its head with his axe. Apparently he was given land for his derring do. 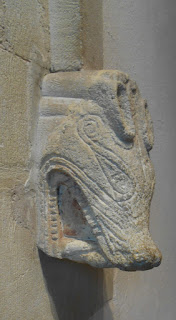 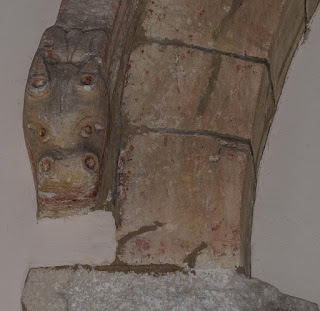 Wherever you look there's some little detail to catch the eye or record the different periods of the changing of the church's fabric. This wall is a perfect example of exactly that. Those triangular apertures are openings to a room behind it. 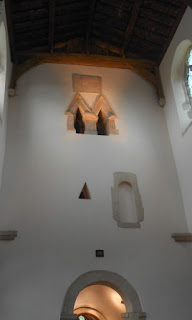 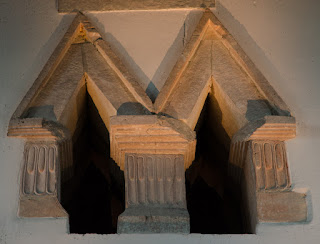 It seems just about every font as a good story to tell and this 9th century one is no exception. It might have the only known double spiral pattern decorating its sides, but this didn't stop it from being abandoned in 1653 and spending the next couple of hundred years being used a trough by a local farm. Eventually it came to light again in 1843 and it was reunited with its base that had been rediscovered in  the Coalhouse inn some 26 years later. 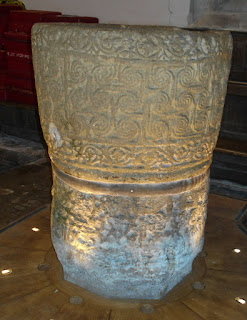 Other small snippets I liked were the inclusion of a pet dog called Terri on the brass memorial for Sir John Cassey and his wife Alice from 1400 and this turkey cock that features on the Strickland family coat of arms. Apparently you have their ancestor to thank for bringing the bird back to the country after he sailed with John Cabot on his voyage to Newfoundland in 1497.

However, what left me with the greatest impression of this church is that right from its Saxon beginnings its story continues to unfold and evolve today. Due to flooding in 2007 a certain amount of archaeological exploration was carried out. This led to the removal of some pews and the finding of a small section of the earliest wall. The space has been opened out to make it more accessible for wheelchair users. Environmentally friendly lighting is set to follow. The opportunity has also been taken to create a new chapel to St Alphege who began his ecclesiastcial work here before going on to become the Archbishop of Canterbury [he was martyred after being killed by the Danes in 1012]. It was completed by an oak altar built by local craftsmen Brian Lovejoy and consecrated in 2012. One wonders where the twists and turns of this place will take it next!
Arilx