After being able to show you the gorgeously coloured Green Elf Cup fungus on Monday, please try and contain your excitement at my personal contribution to the organised walk.....

Afraid it's hardly going to blow your socks off, but the expert who was going round with us seemed more interested [or he was feigning it well] than I had expected and put it in his basket along with the other specimens that people had handed over that he wanted to keep. Not only is it not much of a looker it also goes by the slightly unattractive name of Hazel Wart Wort. I know I've seen it many times before and you never know there's always a vague hope that I might just remember the name of this one. I can count on one hand the ones I'm sure of and this is another one of them.

Now I know these as King Alfred Cakes, but the mycologist referred to them as Cramp Balls. It was believed that you could prevent cramp if you carried one in your pocket. 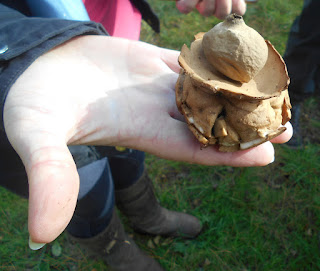 This one too has stuck in the memory banks from a previous encounter. It's the Earth Star and when you prod it out comes a plume of spores....it's a bit like one of those confetti cannons!

The one below is Beefsteak Fungus...it was quite gruesome when it's squeezed because it oozes a blood coloured liquid. 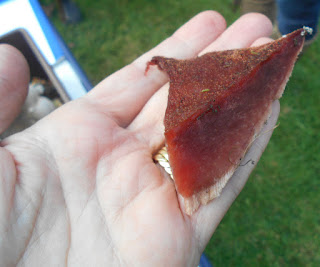 This one isn't classed as a fungus. It's actually a slime mould called Wolf's Milk.....as far as I know wolves milk isn't pink. I think it's alternative name of Toothpaste Slime is a little more apt.

Aside from that any other names I was given have already tottered out of my noggin or I didn't catch them in the first place. We saw many more, but my little camera was struggling with the light levels in the woods so the flash bleached out all of the colours badly.  These are some of the ones people found at the end of the walk all rounded off with a good old cuppa and an appropriately themed biscuit!🍄🍄🍄 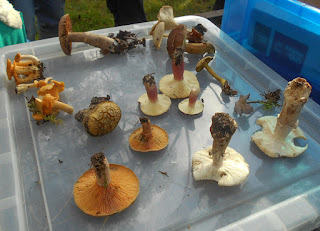 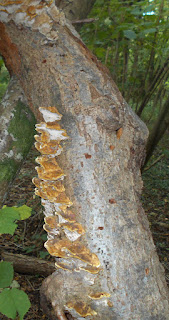 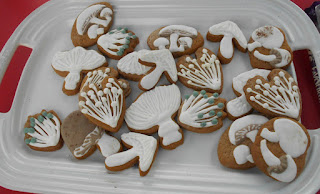 It's always fascinating to learn more about what is hidden away in the woods.
Arilx