Yes Mr GBT and I dodged the tube fare last week when we went up to The Big Smoke ...well I say "dodged" with my tongue firmly in the side of my cheek. Rather than fork out nearly a tenner just to travel a couple of stops we decided to enjoy the sunshine and use those things attached to our hips. That way I wasn't going to have to play sardines on the underground [I'm not quite brave enough for that again yet] plus we got to have some free exercise. Just as well really as I was fully intending to consume my body weight in cake before the day was out. I have to say that I did admirably on that front and achieved my aim effortlessly🎂 The other small bonus you get when opting for Shank's Pony is that you get to see some of the stuff that London is stuffed with......the latest selection of randomness for your delectation! 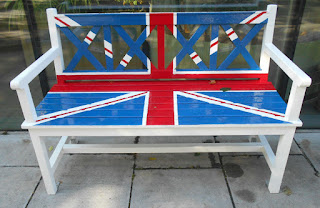 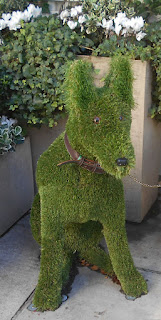 I expected this statue to mark some major historical event. Rather surprisingly it's the 3D version of the logo for a Belgravia drycleaners called Jeeves! 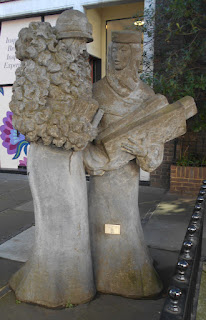 Around this area and into South Ken there are masses of very imposing red brick houses. This rather large eared figure is to be on the former home of Lillie Langtry. I know because her blue plaque told me so....shame it got her date of birth wrong😈

How about this one then for an impressive facade? I thought it was Art Deco and was a bit puzzled when I couldn't find any mention of it. To solve this little mystery I went back to the route of our journey and was able to identify it as the Ismaili Centre. I was rather surprised to find it was only built in the 1980s [by the Casson Conder Partnership]. It has had a fair amount of criticism levelled at it, but I find it quite pleasing, particularly the windows. 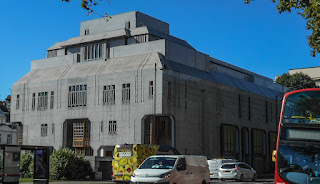 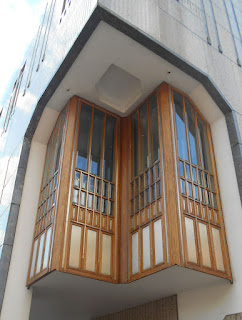 This is the "Twelve Responses to Tragedy" by Angela Conner. It's a thought provoking piece put up in memory of all the people who were imprisoned or killed by the communist governments after they were repatriated at the end of the WWII. It has 12 faces from children to old people peering out on all sides.

This one captures the colours of the season for me. It's part of the Belgravia in Bloom and this one depicts the return of the funfair to the wild. Despite London being so built up it always amazes me that 50% of it remains as green space. 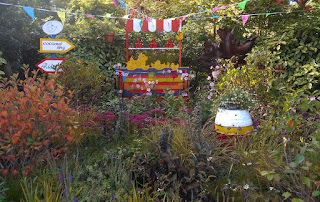 So the decision to fare dodge paid dividends it seems.
Arilx