A spot of gardening

On one of my regular routes into town there is a small cut through I like to use which has is a tiny piece of scrubby land with a stream running along the bottom of it. At times people have used it to dump their detritus [flytipping swines😠], so it was a lovely, if mildly puzzlingly, change when I started to spot a few flowers popping up here and there during the summer. I thought perhaps someone had just scattered a packet of seeds in the hopes that they might germinate. Towards the end of last week I then saw two chaps on the far side of the fence. Unable to resist being snouty I asked them if they were the guerilla gardeners who were responsible for the small changes I'd noticed. Indeed they were and so I took the opportunity to thank them in person for all their efforts thus far. Apparently they've got plans to make it even better next year⚘⚘ 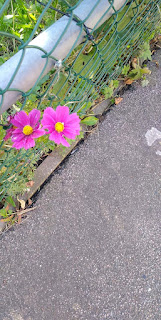 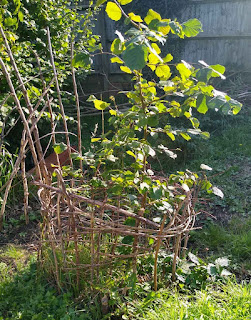 Since my last wander past this sign has appeared. The road opposite is called Shandy's Close, but up until I saw this I had no idea what "Shandy" was. Back in the 1960s this area was all farmland and one of the fields was lived on by some local travellers. One was a carter who had a sandy coloured horse called Shandy. It was well known to the local children and many would feed it as they went past. Informally the field became known as Shandy's Field in honour of its permanent equine resident and when the land was sold for a school to be built on this family were the last to leave. Amazingly Shandy's name lives on and it's been good to be able to learn the story behind the name.🐴

Just a small local snippet, but then these small moments are actually what makes up most of my daily life and they are the ones that are so easily forgotten.
Arilx