The teenogre bless him is mid way through his A level year and yesterday he successfully completed his EPQ presentation. I am hugely relieved it went well for him but he had prepped well. He's working really hard but I am fully supportive of him playing hard too. Now it's back with the nose to the grindstone....French revision apparently for an up and coming test later on this week as he shot upstairs to his room after we'd eaten.....

Except I started to hear some very odd thumping noises coming down from his room through the ceiling to where I sitting directly below....not studying type sounds for sure. It sounded for all the world like he was chasing a badger round his room and believe you me it really is a very small space.
Eventually curiosity got the better of me and I knocked on his door to find out what he was doing. Rather sheepishly he admitted that he was playing one of these [he was listening to music on his phone via earphones]: 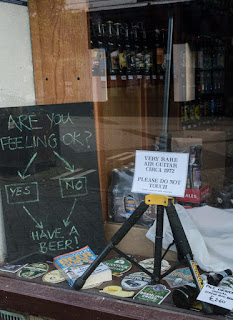 So for anyone who wants to finely hone their air guitar playing skills maybe this might be a good track for starters....The Darkness and "I believe in a thing called love"


Meanwhile being the wicked Mother that I am decided that if he had all this excess energy to burn off he could do so more effectively helping me with a spot of drying up!!