Be glad you weren't one Mr Henry Penfold. Saturday 19th March 1898 should have been an ordinary working day. A new hotel, The Anchor, was being built in the centre of the town and Mr Penfold was driving his steam roller back and forth to tamp down the surface for the road outside. Going about his business as usual he suddenly literally felt the earth move beneath him.....between his two sets of wheels a 22' deep hole filled with 9' of water had appeared.

Thankfully, with an amazing presence of mind, he managed to move the machine out of the way. It transpired that the "hole" was in fact an unrecorded well and had quite possibly been one for the use of the Medieval public. It was drained and filled in and Mr Penfold received this in recognition of his quick thinking and brave action. 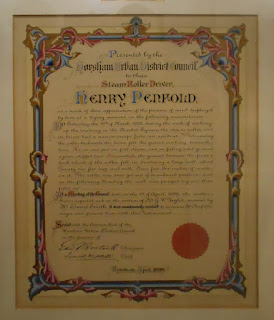