Medieval Misery on a Mo[a]nday

Many don't relish the prospect of the return to work on a Monday particularly at this time of year. I well remember Mr GBT being filled with dread every Sunday night when he was employed pre redundancy unlike now where he is a self employed craftsman. However, whilst you may feel you are carrying the worries of the world upon your shoulders spare a thought for this poor chap....he's carrying the entire weight of the chancel arch upon his and doesn't his face show the strain! 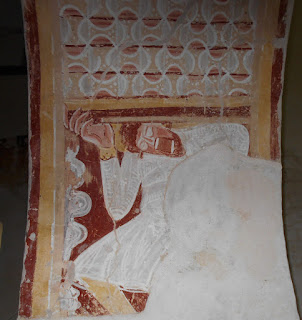 Likely not to have been intended to be taken too seriously this humorous gem is officially known as a caryatid figure and is apparently rare in the context of medieval wall paintings. He is amongst all the other surviving religious artwork in the church at Coombes, West Sussex.

I will put up the other photos tomorrow.