Recently I got wind of this interesting [well it is to me in my odd little parallel world of weirdness!] lychgate in the village where I work every other Tuesday. As usual it's just up the road and as usual I have only just learnt of its existence. Today I got my act together and despite the weather being positively evil [hence the slightly fuzzy photo quality] I took my camera with me. In the brief 20 second respite between heavy showers I managed to get a couple of shots. 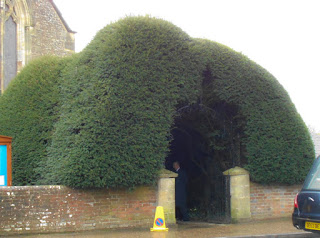 This example unusually is a living yew tree- I thought it a curious contrast that something which is self renewing [bit like Trigger's broom in Only Fools and Horses] should be the place where the corpse is laid before being taken into the church [lych from the Saxon meaning corpse]. I had intended to go and have a nose round the church but there was actually a funeral in progress inside so I didn't want to show any disrespect by taking any more shots than this one from across the other side of the road at an angle. Rest assured the chap you can see is the undertaker not a mourner- they were waiting for the end of the service.

Despite the horrible conditions I did enjoy this "artwork" drawn in the dirt on the back of the van that I parked behind and this rather splendidly rude fellow pulling a face above the door. Believe me it takes very little to keep me amused but I was very grateful to get back in the dry with a nice warming cuppa! 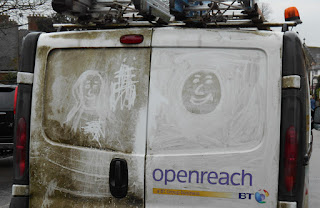 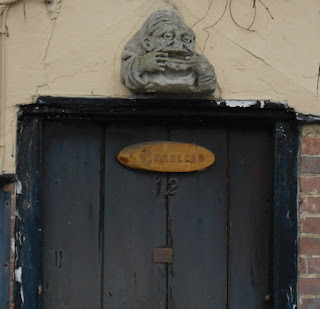