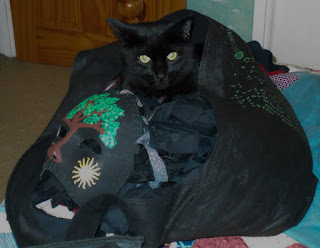 One of the positives of January for me is it's the season of howling, apple howling that is or for non Sussex folk wassailing. We went a few times when the teenogre was a small person as it was rare for us to be able to go out as a couple with him in tow in the evening and now I get to participate in the running of the event.

Following a considerable period in the doldrums the tradition was in danger of dying out. However, with the emergence of the community orchards since the Millennium it has seen a revival of interest and a huge rise in organised events. Invitations for Mythago to attend have increased steadily over the past few years and our present Squire wrote our own version a couple of years ago.

Despite the challenging weather conditions we've had of late, Aril had ordered dry weather for this year's Slindon bash [I am known as a weather witch on the side as I loathe dancing out in the rain and it is invariably dry if I'm there!] Lots of mud yes but no rain...indeed a calm starry night with a huge audience [twice the number as last year] Once again it proved to be a great evening with a local ale tent and local food. No photos this year as it followed a similar format to our inaugural attendance last year http://gnatbottomedtowers.blogspot.co.uk/2015/01/howling-in-sussex.html but Humphrey did sneak into my kit bag just as I was getting ready to leave and then caterwauled loudly when I had the audacity to remove him. Nothing is sacred when you are owned by a bleedin' feline!

My personal highlight was the discovery of this talented trio- they sang unaccompanied during most of their sets and were glorious. A small taster for you from Said The Maiden.