Do you need a DNA test to prove who the father is?

Famous words uttered by Jeremy Kyle as part of the trailer for his show. Now very familiar to me as I have a client who enjoys it so I hear snatches as I housesparkle around her. I'd be a lying toad if I didn't admit that I don't enjoy the odd bit now and again!

Anyway I digress.... earlier this week Mr GBT and I went to see the new Star Wars film "The Force Awakens". I enjoyed it....having ignored the hype it was pretty much what I expected. Similar to the ones that went before but a fun evening's entertainment of escapism. The one thing though that I realised and nobody else seems to have understood is that I am sure that Princess Leia is pulling a fast one and that Han Solo cannot be the father of Kylo Ren or Ben as he was before he went over to the dark side:

Shh...don't tell anyone but I have reason to believe that he was cuckolded by this man 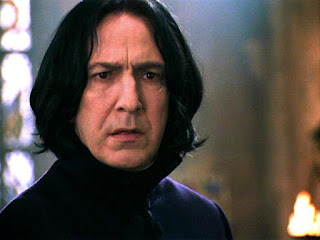 No less than Severus Snape...surely that explains his complex relationship with darkness and light....or maybe I have turned into Luna Lovegood and everyone is being too polite and is not telling me.