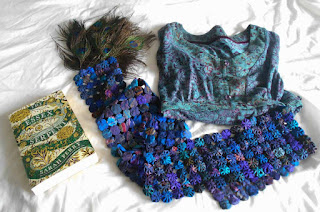 This eclectic group of items came home with me on Sunday and cost not one groat. It was part of Sussex Green Living's inaugural Share Fair and is an idea designed to bring the community together. On this occasion I must admit I didn't get involved with either the organisation or volunteer on the day [beyond making the recycling boards] as I've just taken on a load more recycling sorting for them.

This year they had various pop up stalls including ones doing wild food cookery, the Repair Cafe, recycled crafts and a handful of stalls which were literally giving things away [I did donate some bits too].  Next year it's hoped to make it a bigger affair with people sharing skills and building connections. The concept is simple...just sharing and no money changing hands. I hope to be able to be on board by then.

Finding the peacock feathers was perfect timing. Mr GBT had just been bemoaning his lack of suitable feathers on his Morris hat and I think a few would just finish my peacock inspired coloured dancing mask perfectly. Seeing as it won't get another outing until December even I haven't got the excuse of lack of time to get on with it!